ARK Waterproofing is a registered asbestos handling contractor, from complete re roofs to roof restorations. Know more about Asbestos:

Asbestos is a naturally occurring substance. In the environment it poses virtually no threat to humans. The problems with asbestos arose out of the full-scale mining, extraction and use of the substance in the construction industry. Asbestos fibres are microscopic, and when exposed they become airborne and can easily be inhaled.
Once inhaled, they lodge in the outer tissue lining of the lungs and abdomen, which will eventually lead to inflammation, scarring and the eventual formation of fatal diseases such as lung cancer. For many years, asbestos was used in buildings as a fireproof material. It is often found in insulation, floor tiles, joint compound and other areas in the home.

Asbestos was considered to be the miracle substance in the 19th Century, as it is comprised of a number of naturally occurring silicates. Originally, this material was popular for its economic advantages, along with its sound absorption, tensile strength and its fire, heat, electrical and chemical damage resistance. Over time, studies began to show that prolonged inhalation of asbestos fibres was linked to serious illnesses, which include lung cancer, mesothelioma and asbestosis.
Asbestos fibres are released into the air when the asbestos-containing material is disturbed. This may occur during demolition work, building or home maintenance, repair, and renovations. Therefore, exposure may only occur when the asbestos-containing material is disturbed or damaged, casing the release of particles and fibres into the air.

Early symptoms could include chest pain, shortness of breath, respiratory failure, cardiac arrest and eventually death in the much later stages. It may take anywhere from 15 to 50 years for symptoms to develop from the very first contact with the fibre.
In most cases there are reportedly little to no symptoms during this dormant period, and to date there is no cure for asbestos related illness.
Lung cancer is closely related to the exposure to asbestos. It is fatal especially if not caught in its early stages. It can occur with low levels of exposure such as those that occur in the general environment. Higher lung cancer rates are linked to all three types of commercially mined asbestos.

The World Health Organization (WHO) estimates over 100 000 asbestos related deaths per year world-wide, with 125 million workers exposed to fibre around the world. In South Africa reports estimate approximately 200 cases of mesothelioma per year, however this is most likely an underestimate number considering the magnitude of mining and processing that took place across the country that was a leading global supplier of three of the four main types of asbestos. Many cases are assumed to be undiagnosed and unreported.

These are the four types of asbestos fibres

How best to identify asbestos

It isn’t easy to identify asbestos simply by looking at an item, which makes it difficult to locate it in your house. However, some asbestos products contain identification marks, making it easier for those with a trained eye to spot the contamination.

Unfortunately, the easiest way to identify asbestos is also the most dangerous, because that means the asbestos fibres are exposed and could find their way into the air that you and your family breathe.

We’ve all been exposed to asbestos at some point in our lives, but the implications will be minimal. There is no way of accurately knowing how much or how little exposure is needed to contract a serious illness. If you discover an area in your home that may be made from asbestos but aren’t sure, you should treat it as though it contains asbestos. Unless you are authorised to provide asbestos removal services, extremely dangerous and even illegal in some parts of South Africa to attempt asbestos roof removal and repair. It is imperative that you have an asbestos removal specialist identify and remove all materials containing asbestos using the proper safety precautions.

Asbestos is commonly used in the following areas 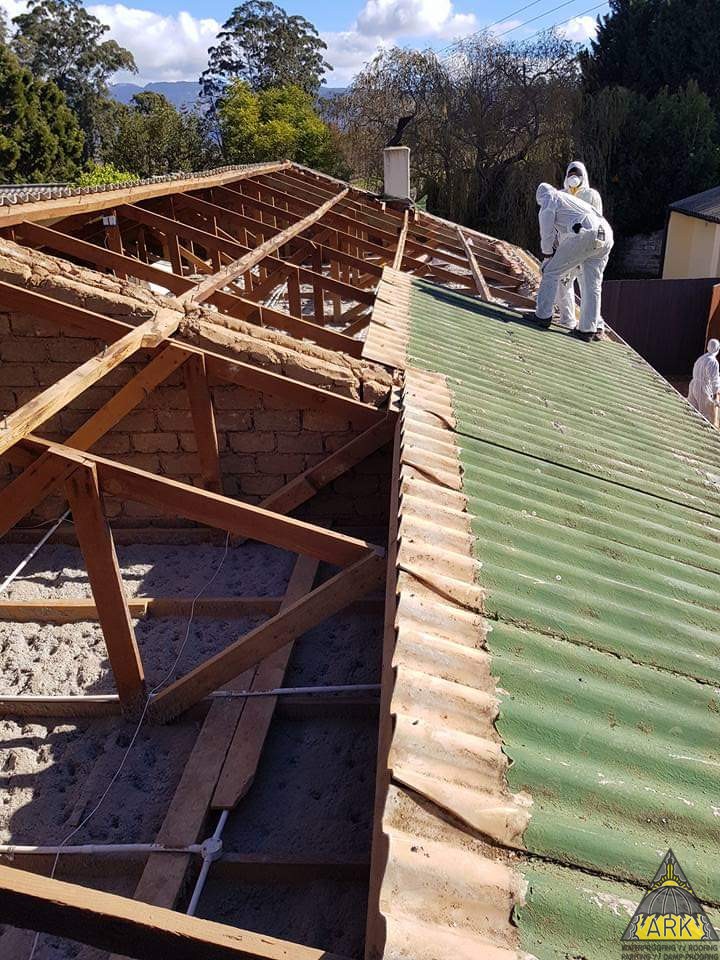 Asbestos was also used in the manufacture of older-type panel heaters and stove insulation, and an asbestos sheet was a common roofing product from the 1940s until the mid 80s. It is estimated that at least one in every three buildings constructed between the 1940s and 1980s in South Africa contains asbestos products.

Tiles containing asbestos include mastic or bitumen-based, pressed metal roof tiles that were produced prior to the early 1980s. Therefore, all mastic or bitumen-based pressed metal roof tiles should be suspected to contain asbestos. Roofing shingles containing asbestos were manufactured from a mix of asbestos fibres and hydraulic cement. They were popular for their rigidity, durability and fire resistance. They were popular as they would not warp or rot, and were resistant to insect damage. Many buildings still have these asbestos shingles on their roofs and if they are in good condition and left undisturbed, most times will not cause any serious problems.

Even though South Africa officially banned the manufacturing, processing and use of asbestos and asbestos-containing products in 2008 (by the Environment Conservation Act 1989 and the March 2008 Regulations for the Prohibition of the Use, Manufacture, Import and Export of Asbestos and Asbestos Containing Material). The last of South Africa’s asbestos mines ceased production in 2001, and only closed down the following year in late 2002. Asbestos remains widespread across South Africa, and the world, and is commonly found in our homes, schools and places of work. The presence of asbestos in any building  is not necessarily hazardous unless the material becomes damaged.

Buying and selling of older properties with suspected asbestos

When a potential purchaser finds themselves looking to buy a property it would be in his/hers best interest to investigate whether asbestos material is present in the property. If asbestos roofing, tiling,… etc. is found it is best to either use this fact to negotiate a more favourable price, due to the exorbitant removal costs, or alternatively stipulate the purchase subject to the removal of all asbestos roofing at the seller’s expense.

For property owners asbestos roofs may affect investment values of buildings,
significantly reducing their appeal and value. Investors will consider the cost of asbestos replacement when offering to purchase, which could create a negative price trend. This is something all sellers want to avoid. When in doubt, play it safe. If you have an older property and you are not certain whether asbestos is present in the roof or not, it is safer to proceed with caution. Contact an approved contractor who can safely asses the property and if found, repair your roof using the proper safety methods and equipment.